Season of the Witch — Coming out of the Broom Closet. 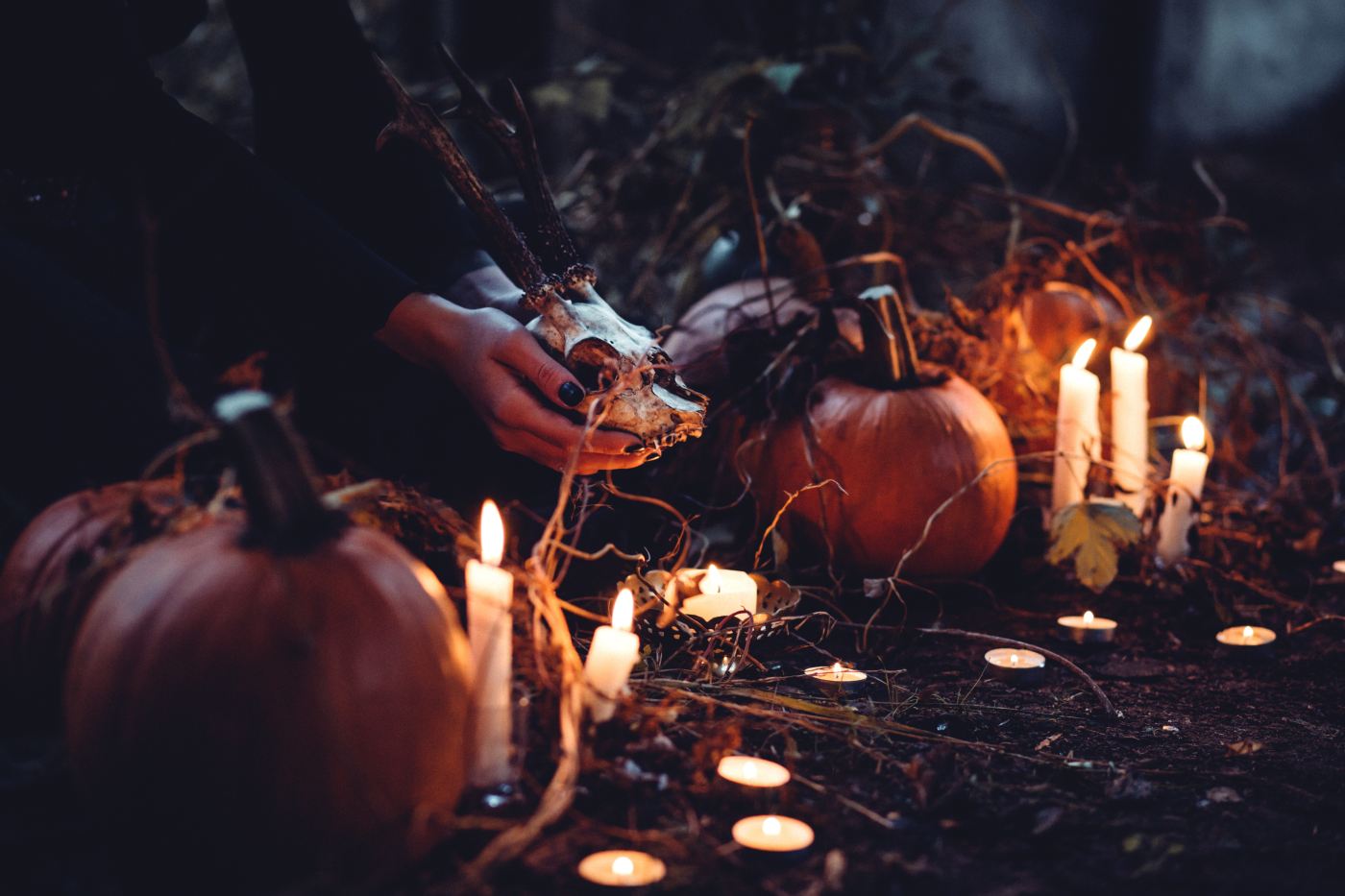 I think it takes huge balls to be a grownup who still believes in magic.

Just believing is a real accomplishment - it means you somehow kept your childlike wonder and didn’t completely succumb to the harsh realities of the world. It means that you’ve managed to shield yourself from all the ways others have tried to control you. It means you’ve kept your mind wide open in a world determined to slam it shut.

It means you’ve found your power, and you’re not afraid to use it.

But, to be open about your witchiness, too? Well, that’s some OG shit. Everybody knows the OG witches have the biggest balls, because three-hundred-ish years ago they were getting burned, hanged or drowned for practicing their arts. No doubt my ancestors were among those who perished for their rebellion against the church, the patriarchy and the government. We went into hiding for our own safety back then, and we’ve passed down our secrecy generation to generation ever since.

The first image I remember of a “witch” is the Wicked Witch of the West from the Wizard of Oz. I don’t know why the pink, sparkly, good witch didn’t stick with me, but the one with the green face and the black pointy hat definitely did. The next witches would have been in The Craft or Practical Magic, probably. They definitely weren’t ugly, but still kind of dark and scary.

And, I guess maybe that’s how I come across to religious people, or people who think of witchcraft as something reserved for those who worship Satan and the Gods of the Underworld or whatever. But, it’s not like that - not for me, anyway.
I have some specific rules with my practice. Like for one, I only do vegan magic- so no drinking blood, sacrificing anything or whatever you imagine when you think of dropping eye of newt and toe of frog into a cauldron.

I don’t do dark stuff like curses, because I believe that karma is a real thing that still applies in the realm of magic. I don’t do love spells, because I don’t think anything good can come from tying someone down with someone they didn’t choose. Even if you can make them stay, why would you want to if you knew they didn’t want to be there?

I don’t do anything that feels unethical or disagrees with my intuition or conscience.

I do read cards to gather information about the energy around people and their situations. I study my dreams for guidance in my own life. I set intentions and focus my energy toward manifesting what I want - it literally works for anything. “Whatever the mind of a man can conceive, it can achieve” as W. Clement Stone said. When you tell the universe you want an experience, item or opportunity, then watch as you’re guided directly to it- it’s a total rush! Sometimes I put intentions out there just to see how the universe will bring me what I’m asking for. When those things materialize- just like magic- it reminds me that anything really is possible.

Wait…Does this sound crazy? That’s why we don’t talk about it!

Pretty much the fastest way to make people think you’re nuts it to start talking about your magical powers! But here’s the secret: literally everyone has spiritual gifts - most people just don’t explore and develop theirs.

Spiritual gifts are kind of like playing the piano. Some people are prodigies, and from childhood they can sit down and play at an expert level. Others need teachers or mentors to help them develop their skills. They become proficient with practice because they love it and they are driven to learn and excel. Others will dabble on their own and use it only for entertainment, while some will never touch the keys at all. There are lots of genres of music, and each player will likely have a favorite, though they might play many.

The big difference between playing piano and studying witchcraft is that pianos are commonly accepted as innocuous, and about one-hundred-percent of people believe that pianos are real. No one thinks you’re a lunatic if you play piano, the church will not condemn you and your family will still invite you to dinner. So, you know… really similar.

Also, people generally know what a piano player is, and how it works to press the keys and make noise come out. Witchcraft is pretty widely misunderstood. So, I’ll break it down for you a little bit, if you’re curious… or gathering research for a psych paper or something.

Most witches use tools: like a ceremonial dagger to prepare the sacrifice for the pagan gods. I’m totally kidding! Vegan magic only, remember?
But, we do use tools of divination like tarot cards, runes or tea leaves to name a few. We might use stones, crystals and items from nature like herbs, flowers or feathers. We might work to develop our psychic abilities, empathic abilities or become more in tune with the earth and the energy that surrounds us. Just like the OG witches, we do healing work and may practice many modalities of healing.

Witches can draw power from any source - the planets or heavenly bodies, gods or goddesses from any mythology (religion), their ancestors or spells. Witches understand that thoughts and words carry a vibration that changes things in the physical realm. Spells are nothing more than intentions with focused energy- mantras spoken so many times, with such complete belief, that they become part of our physical experience.

We generally believe in the universal laws of attention, action and attraction. We study everything from Voodoo to aroma therapy, to learn the vibrational signature of things. We learn about chakras and candles and how to decipher the voice of our intuition from the much louder shoutings of our ego. We understand that divine timing is not the same as earth time. We believe that life continues in the realm of spirit after our bodies leave the earth plane, because our souls are eternal. This means that our ancestors are always nearby to love and guide us.

Ok, I know you’re judging me now. And frankly, I don’t blame you. I thought this stuff was crazy, too, before I started practicing. I was skeptical for sure. But, I also knew that there were times my intuition told me things that helped me. I knew that my dreams helped me understand my life, and prepare me for future events. I knew there was an intelligence larger than myself that I could tap into when I needed it. I just didn’t know exactly what that was.

Now, I understand that it’s the thing people call “God”. The divine energy source that people are trying to access through religion, prayer, offerings, fasting, ancient texts- whatever they call it- it’s that.

But, religion teaches us that we are separate from “god”, which is to say that we are also separate from that divine source of energy that “god” is. And, we’re not just separate in most cases. Religion would have us believe that we’re totally unworthy of this energy, and we must jump through hoops for eternity to maybe get a taste of it when we’re dead, assuming we don’t burn in hell for all of our terrible sins.

Witches understand that we are “god”. We are the divine creators of our experiences. We are the architects of our lives. That power source that religion says we are separate from is as much a part of us as our bones, our breath. This is true for every human being on the earth. The power we seek is already part of who we are. We just have to be brave enough- or crazy enough- to believe that it’s there and begin learning how to focus it to create the life we desire. We can call on the gods, goddesses, angels and our ancestors- any deity or energy that we feel connected to- for guidance, assistance and protection.

This time of year, the veil that separates us from the realm of spirit grows thinner, making contact easier from both sides. Halloween, or Samhain if you’re Pagan, is right around the corner, and we’re thinking about spooky things. It’s also harvest time, and we are gathering the fruits of our intentions and actions- which is the greatest evidence of our creative power. Truly, this is the season of the witch, so if your neighbor lady is dancing around a fire with her friends, look away. Or, grab a glass of wine and go join them if you dare.

As people awaken to their divine nature and the power they possess, they are walking away from religion and looking for other ways to nourish their souls. This is making witchcraft more “mainstream” kind of- which means bougie hippies can go to the mall to buy a piece of rose quartz and some sage.

You have to know there is more to the craft than buying some trinkets at the mall. Purchasing such items and studying the arts of magic are not the same thing. If you’re curious about things of the occult, magic and the world just beyond the one you understand, you must become a student of all things spiritual. Find a mentor and learn your craft as the sacred, ancient art that it is. Don’t know where to find one? Go hang out in metaphysical shops and places where the healers and seers are.

Respect the tools and methods of the witches that came before us. Respect the earth and its creatures. Respect your fellow humans, and learn to use your powers for good. Only bad witches are ugly, dear. Come on out of that broom closet when you’re ready, and bring forth your lovely light. The world needs us now, more than ever.

And always kill ‘em with kindness! People can’t stand it when you’re happy and carefree! 😅🥰 #sorrynotsorry #keeponkeepingon
Pretty please? 😆
How’s your Monday? 😆 ☕️ #jitterjuice
I promise the people who love you would rather listen to you cry on the phone for hours, drive to your house to sit on the couch with you, even come cook you a meal or help you with chores than lose you. If you’re struggling, please reach out. You’re never alone.
Happy Lunar New Year! It’s the year of the water rabbit, fertility and abundance abound! 🐇 🎊
Help can look like: